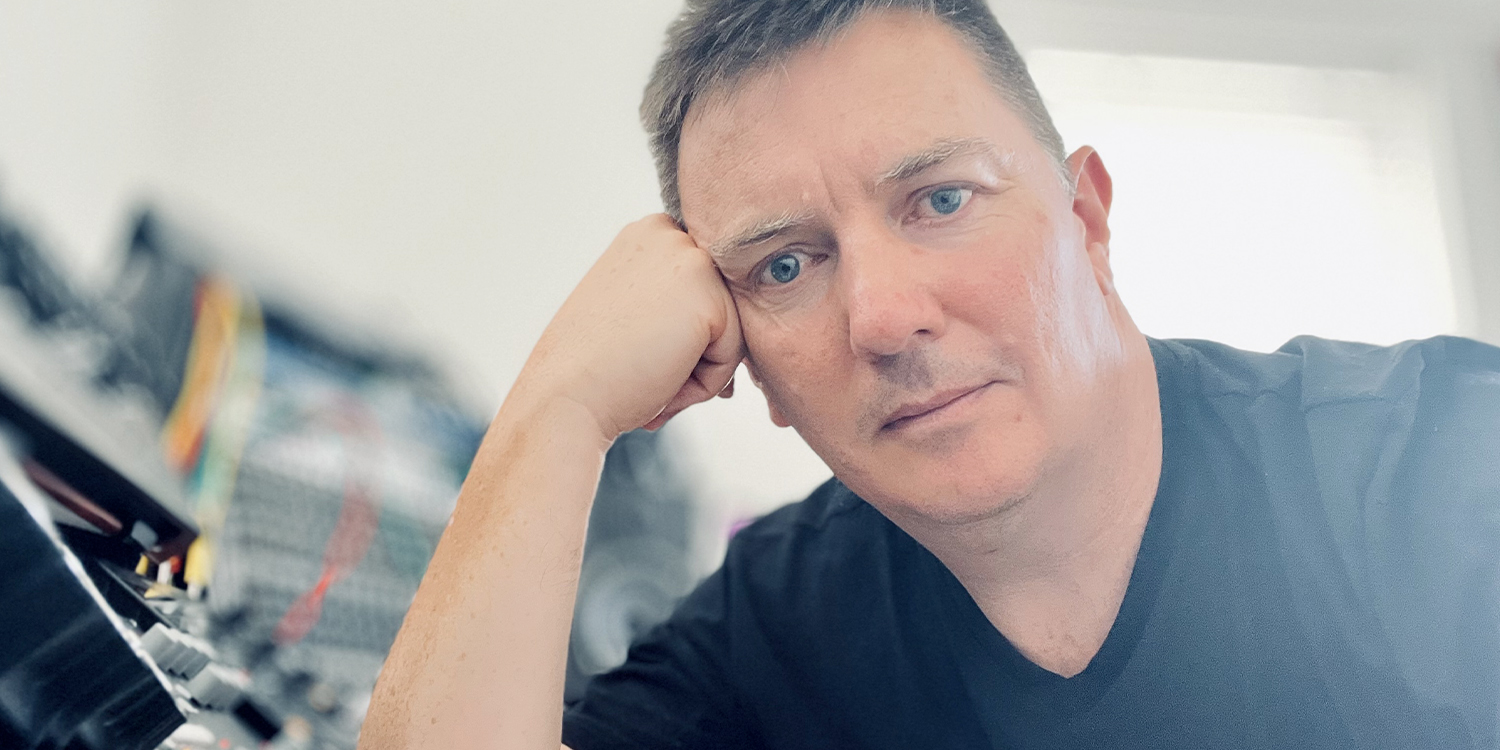 01. Who are you ?
My name is Simon Ferris, a musician, composer and synthesist, based in Devon, UK. I began creating music with tape machines and keyboards in 1989. Assembling a small home studio throughout the 90’s, during which time the zYklen sound/moniker evolved. I continue with a compact setup occupying one end of my home office.

02. What are you listening actually ?
What I listen to depends on what I’m doing or who I’m with. When working or sleeping I mainly listen to atmospheric or instrumental music.

Today, I have been listening to Bohren & Der Club of Gore & Bersarin Quartett.

3. How you came to music ?
From an early age I have been acutely aware of sound: whether environmental/natural, SFX/music in radio/TV/films, or the subtle burbling of a fridge; sound just fascinates me.

I distinctly remember experiencing the theme from Dr Who, I Feel Love by Giorgio Moroder and Oxygène by Jean-Michel Jarre for the fist time. I had no point of reference for what I was hearing and was intrigued by how this music was made. So began many years of fascination, exploration and investigation.

This combination allows computer-free, stand-alone multi-track recording, or recording/mixing directly in computer. The computer itself can be played and sequenced from external hardware or it can be the sequencer for external and/or software instruments. Any blend of these is possible (took a long time to develop and fine-tune the workflow).

I prefer interacting with tactile surfaces, becoming familiar with and developing a rapport with each instrument. I like working within the limitation of each device, ultimately this allows me to work intuitively and quickly with little mental overhead.

When it comes to computer/software it is easy to become overly analytical and start using eyes more than ears, or just keep adding things. Having said that, the computer is excellent for mixing, editing and arranging when needed.

Performing live, I focus on a small, compact hardware setup. Not had as many opportunities to play live recently.

5. Do you have an anecdote or a memory to tell us about your music ?
The serendipity that lead to me DJing at Megatripolis Sunday Thing events in mid 90’s.

It started with Chantal Passamonte hearing one of the many mix tapes I distributed amongst friends and ringing the phone number on the cassette. It was my parents home phone and after some confusion, my mum kindly provided my work number in London. My colleague (also called Simon) answered the phone. Overhearing him deny any knowledge of a mix tape piqued my ear and (realising I was the correct Simon) he dutifully passed the phone to me just as he was about to end the call abruptly. A brief conversation with Chantal ensued, we agreed to continue in person.

After work, I headed over to Ambient Soho in Berwick Street (I was a regular at the shop already). I was booked to perform at the launch event at Heaven a couple of weeks later. I mixed records with my own four-track cassettes, so needed to return to Cornwall and collect tapes and vinyl (had just moved to London and was yet to move into my own place).

In the intervening week, while queuing for Quirky in Brixton (to watch Mark Van Hoen perform as Locust, I also got a free 12” Needle EP), I happened to make a new acquaintance (another Simon!). He worked at Vital Distribution (who pressed/distributed vinyl for several independent labels). We hit it off, turns out he lived 10 mins from where I was staying temporarily. A few days later, after an evening at his house, he gifted me an armful of white label/promo vinyl.

As I was performing the following weekend and didn’t have access to a turntable, my second opportunity to listen to these records was at the venue on the night.

I was the penultimate act of the evening, Mixmaster Morris was headlining. As my set progressed, Morris kept looking over, eventually asking if he could take a look through my records. He was amazed how I had so many of the same promo records he was planning to play that evening (to his credit, his set was brilliant).

My set closed with NASA by Jam & Spoon, while lasers illuminated a 10’ water fountain running at the back of the club… I performed several times, but that evening was a high point. I met Sean & Rob from Autechre (who were about to release Amber) and my guest list included friends, including Luke Vibert (Phat Lab Nightmare had just been released, aside: I am credited as ferristown on the album’s thanks list).

If I had to choose, it would need to be someone idiosyncratic or eccentric or just have to be fun.

I would probably say Ben Edwards (Benge) as I’ve listened to his music since the release of Electro-orgoustic Music and his albums always contain something unexpected!

7. What are your plans for the future?
I have a couple of albums of material completed, but as I have been recording without a clear theme lately, song selection and running order is a challenge. I need to prioritise getting them finished.

The upcoming Dive In 3 compilation is exciting, plus I have submission for a compilation album for the memory of my friend Dave Muddyman (of Loop Guru) who recently passed away. My side project Voyetra also has a submission for the compilation, which is more of a downtempo/breakbeat style.

Have an album set for release soon (on Neotantra as Bandcamp exclusive), which may release on streaming platforms later in the year.

I have also been working on an album titled “The Haunting of Crag Hotel” based on an experience I had visiting the aforementioned hotel in Cornwall as a teenager. This is more of a challenge musically, due to blending traditional instruments such as guitar, mandolin, violin etc with electronics. Not sure how long it will take to complete, the writing process has been quite protracted. Sometimes feels it may never be completed…

I intend to get back to producing short video’s to go with my music (used to put them on Instagram/Youtube quite regularly), I have suitable video captured, so I’ve now committed myself, it might just help get more subscribers and finally be able to create a custom Youtube URL!